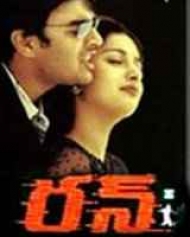 Romance
Release Date : 03 Apr 2003
Cast : Madhavan, Meera Jasmine
Director : N. Linguswamy
Synopsis
Run is an Action Romance based movie. In which, Siva (Madhavan) comes to his sister's (Anu Hassan) place in Hyderabad from a small town to do his graduation. He falls in love with a girl whom he saw on the road and proceeds aggressively to woo her. Her name is Priya (Meera Jasmin). She also falls in love with him. But the catch is that her brother (Atul Kulakarni) is a ruthless gangster in the city and would not spare anybody who follows his sister. At this juncture, Siva retaliates and beats up the henchmen of gangster. Then starts the war between the Siva and Atul.

The rest of the story is all about how Siva fight against her brother to marry Priya.