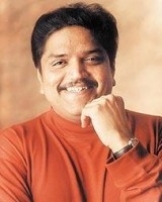 Vidyasagar was born into a Brahmin family of musicians, and he was born and brought up in Chennai. His father U. Ramachander was a musician who could play eight instruments and his grandfather Varaha Narasimha Murthy was the court 'Vidhwan' for the king of Vijayanagaram Bobili in the state of Andhra Pradesh.

At the age of eleven, Vidyasagar knew how to play a dozen musical instruments and signed up to work as a regular musician for many music directors. Vidyasagar could play for all languages because then, most films had their recording done in Chennai.

Vidyasagar wanted to then compose his own tunes and have someone else play them. He had assisted various music directors and even given ghost music to some of them. So he had the experience and wanted to compose independently.

In 1994-95, Vidyasagar was picked up by Tamil actor-director Arjun, with whom he worked for many musically acclaimed films like 'Jai Hind', 'Karna', 'Subash' and 'Sengothai', though the movies themselves didn't do well. Vidyasagar composed some of his best music for Arjun's films with some melodic numbers like 'Malare', 'Bhoomiae', and 'Padu Padu' some of which went unnoticed. After a not so impressive start in the Tamil film industry Vidyasagar was discovered by Malayalam film industry.

From 1996 to 2001 Vidyasagar mainly concentrated on Malayalam films where he became the top music director. In Malayalam right from his first film "Azhagiya Ravanan" to "Meesa Madhavan" he struck the right cord. He has created scores in which ragas and rhythms combined to a good melody, which even bagged him four Kerala State Awards.

Vidyasagar's love for melody has made him turn to the Malayalam film industry time and again, and the songs in hit films like Azhagiya Ravanan, Meesa Madhavan, Gramaphone, CID Moosa and Kilichundan Mambazham were all well received.

Through his music he experienced all kinds of song situations and he explored his talent to the maximum in that period. His film 'Pranayavarnangal' is still considered by many as one of the best albums ever cut in Malayalam industry. Malayalee listeners still see Vidyasagar as their hot favourite after Ravindran. Undoubtedly, the talented music director has given his best in the Malayalam film industry.

His career best was "Millennium Stars"(1999), in Malayalam, which was a WorldClass soundtrack. Some songs were bilingual, and India's best singers, Dr. K.J. Yesudas and Hariharan sang together in these songs. Songs like "Parayan Nhaan Marannu" and "Shravan Gange" in this movie, were truly of the class of the world's top soundtracks.

During this period, Vidyasagar's song compositions in Tamil movies like 1998 Vijay starrer "Nilaave Vaa" and "Uyirodu Uyiraaga" starring Ajith did catch everyone's attention and became quite popular but still the bad patch in Tamil films continued for Vidyasagar during this period.

Vidyasagar was probably the only composer in South India who has delivered many super hit songs during his early days but was not considered a success. Even today, some of Vidyasagar's prior songs composed for movies are sung by music troupes. But the total success of the film counts ultimately because the music director will be identified with the film.

After a successful Malayalam career he made a come back into Tamil with "Dhill" and "Poovellam Un Vasam". Songs in both of these films were instant hits. Then came "Dhool" which opened new doors in Tamil songs with the highly successful folk song 'Ithanadu Kara Kodumae', and great melody in 'Aasai Aasai'.

With "Dhool" and "Dhill" under his belt, Vidyasagar was the talk of the town, for which he had to wait for 13 years. With a successful come back he then went on to compose music for some of the most successful films of the year 2002-2003 like "Anbe Sivam" and Madhavan's "Run" which was a huge musical hit as well as commercial hit.

The music composed by Vidyasagar for movies released in 2003 "Iyarkai", "Thithukudhe" and "Parthiban Kanavu" were highly popular in spite of the fact that some of these movies failed at the box office. Vijay's "Thirumalai" was another hit album.

The year 2004 saw Vidyasagar come up with "Ghilli" which was an instant hit with the song 'Appadi Podu Podu' ruling the charts in Tamil music world. This was followed by other hits like "Madurey", "London" and "Ji" in 2004-05.

In the year 2005, Vidyasagar received the national award for the Telugu movie 'Swarabhishkam' by K. Vishwanath featuring carnatic classical music. Vidyasagar continued his success spree by composing music for Rajnikanth starrer 'Chandramukhi' (he mentions this as a call from God), which was the biggest hit of the year 2005 and a comeback movie for Rajnikanth.

The audio of the movie was a best seller and the BGM (Back Ground Music) of the film was also released for the first time in the Indian music industry. He has composed music for the Hollywood movie "Beyond the Soul" directed by Rajeev Anchal.

The years 2004-2005 also saw him score music for the Hindi movie "Hulchul" directed by Priyadarshan. With Mozhi, Vidyasagar once again gave listeners some songs like "Katrin Mozhiye" and "Sevvanam Selaikatti" which were instant hits of 2007.

In 2008, Vidyasagar came up with chart-topping songs for "Kuruvi" starring Vijay. "Kuruvi"'s music was well received by music critics and Vijay's fans.

Vidyasagar is now a well known figure in the Tamil film music industry, often for his hugely popular numbers composed for movies starring Tamil superstars Vijay and Vikram. According to  Vidyasagar, "When success eludes you, nobody is bothered about you, what you know and what you could do. That is why mediocrity succeeds. If you are successful, nobody questions your knowledge."