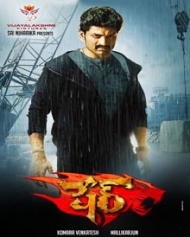 Sher is a action entertainer movie directed by Mallikarjun. In which, Kalyan Ram and Sonal Chauhan are playing the main lead roles and Vikramjeet Virk plays negative role.

The story of the film offers nothing but a routine revenge drama. To put it straight and simple, it is the story of a guy called Gautham, who takes revenge on the baddies that killed his mother and brother, connecting the dots. What role did his love of the life play in the journey? How did he chase the evil forms the rest of the story.