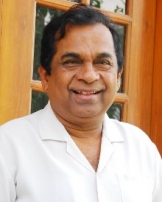 Brahmanandam is an Indian film actor and comedian, known for his work predominantly in Telugu cinema.

Brahamanandam is a native of Muppala village, near Sattenapalli. Brahmanandam completed his M.A. (Telugu) and worked as a lecturer in Telugu before Jandhyala introduced him to the silver screen with a role in the movie "Chantabbayi."

Much before that, he won the Best Supporting Actor award in an inter-collegiate competition in Narasaraopet in 1968 and the fancy dress competition award for portraying the character of "Modabbayi." After a brief hiatus, he was given a role by D. Ramanaidu in "Ahana Pellanta," and Brahamanandam never looked back.