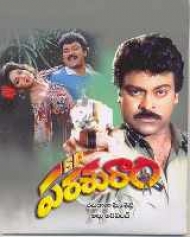 U | Action Drama
Release Date : 15 Jun 1994
Cast : Chiranjeevi, Sridevi Kapoor
Director : Raviraja Pinisetty
Synopsis
S.P.Parshuram is an action oriented movie in which, Parshuram (Chiranjeevi) is a police official who is very rash and is willing to arrest his own family for the sake of the law.
Harish, his brother, is caught in a blue film gang, and Sridevi, a common thief, almost becomes a victim but manages to escape.
Because she is a witness, she is later assaulted and becomes blind. Rest of the movie is about how Parshuram recues his family from gangsters.