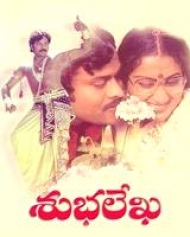 U | Drama
Release Date : 11 Jun 1982
Cast : Chiranjeevi, Sumalatha
Director : K Viswanath
Synopsis
Subhalekha is family oriented movie in which, the story is made with a message on dowry and was a huge musical hit and a Jewel in the crown for our megastar. Sumalatha is a middle class girl who is well educated and beautiful. Her father tries to get her married but is not able to meet the demands of high dowrys.
Chiru is a graduate who is looking out for jobs but is not able to find any so he supports himself doing small odd jobs and believes that it is not wrong to work anything as long as it is not illegal.
They both meet and become friends. Sathyanarayana is the father of sudhakar (who became famous with this movie as ‘Subhaleka’ Sudhakar) who wants to marry his son to anyone who will give lakhs of dowry since he is educating him to be a doctor.
Sumalatha...