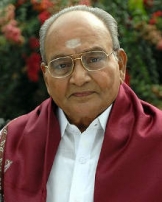 Kasinadhuni Viswanath aka K. Viswanath, is an acclaimed Telugu film director and actor whose contributions have been significant to Indian films through the Telugu film industry.

He debuted as a director with Aatma Gowravam, which starred Akkineni Nageswara Rao. However, his full prowess in film-making flowered with a subsequent film called Siri Siri Muvva.

Swathi Muthyam was India's official entry to the Oscars in 1986. Viswanath was awarded the Padma Shri by the Government of India for his contributions to Indian film.

He will be awarded the Dadasaheb Phalke Award, the highest award in Indian cinema, at the 64th National Film Awards.