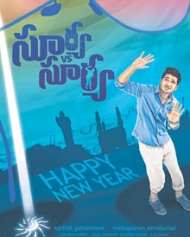 Surya (Nikhil) suffers from a rare genetic disorder, Porphyria. He cannot face sun directly as it effects his hemoglobin and thus causes death. However, that doesn't stop him from falling in love with a TV anchor named Sanjana (Tridha Chowdary).

But to win his love, he got to challenge his rare disorder....