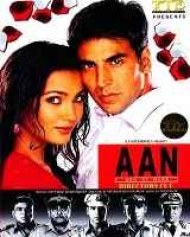 Action Drama
Release Date : 04 Jun 2004
Cast : Shatrughan Sinha, Akshay Kumar
Director : Madhur Bhandarkar
Synopsis
Aan: Men at Work is an other cop story dealing with the politician-underworld nexus. Honest, diligent and brave DCP Hari Om Patnaik has to bring to charge some dangerous criminals, however to this extent he is successful in doing so and is promoted to Bombay's crime branch where senior police inspector Vikram Singh and his crew which includes Inspector Appa Kadam Naik, head constable Khaled Ansari among others has control.

On arrival he finds that these cops are not discharging there duties properly and attempts to bring them to justice. It takes the help of Vikram Singh along with the help of the entire police department to bring some of Bombay's big criminal wings to justice.