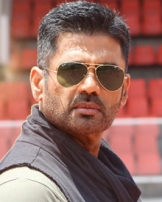 Suniel Shetty is an Indian film actor and producer; hotelier, liquor and fashion boutique owner. He is mainly active in Bollywood.

Suniel made his acting debut in the 1992-film Balwaan which was a moderate success. His first major hit was the 1994-action thriller Mohra. Later that year he also had another hit with the romantic drama, Dilwale and the comedy, Gopi Kishan. He went on to star in many films throughout the 1990s, mostly in the action genre.

Suniel was born in Mulki, Mangalore taluk, Karnataka to a Tulu-speaking Bunt family, he changed his name's spelling to Suniel Shetty for numerological reasons.

He is married to Mana Shetty and has two children called Ahan and Athiya. He is often called the He-Man of the Indian Bollywood industry. He is a Black Belt in kickboxing.