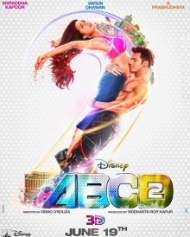 ABCD Any Body Can Dance 2

U | Drama
Release Date : 19 Jun 2015
Cast : Varun Dhawan, Shraddha Kapoor
Director : Remo DSouza
Synopsis
ABCD 2 - Any Body Can Dance 2 which is the sequel of 2013 Abcd - Anybody Can Dance will be the first 3D dance movie.

The film explores the real life struggle of choreographers Aryan Suresh, Vinnie and Vernon from Nallasopara (Mumbai suburb), who went on to win the World Hip-Hop dance championship.

The sequel promises to be even bigger in scale with current heartthrobs Varun Dhawan and Shraddha Kapoor in the lead and the inimitable dancing Star Prabhudheva reprising his role of Vishnu Sir.

Story in detail:
The movie begins with a dance competition where after the performance of Suresh (Varun Dhawan) and his troupe, judges accuse them of copying the act of a Philippines dance troupe. The judges ask him how he could do such a thing, being the son of a...