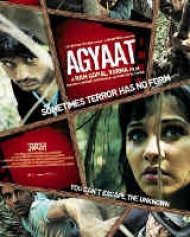 Thriller
Release Date : 07 Aug 2009
Cast : Nitin, Priyanka Kothari
Director : Ram Gopal Varma
Synopsis
Agyaat is a thriller movie which revolves around a film unit that goes to a jungle for a shoot and gets misplaced. The shoot is put on hold when a camera malfunctions and they have to wait for a replacement.

To kill time they decide to go on a trek into the jungle with the caretaker of the jungle. When the caretaker is found mauled one night the panic and fear of the darkness of the unknown world sets in and the movie take a 360 degree turn as each one present there is fighting for their lives from something they have not seen. This unseen is faster, smarter and is out to kill them.

We see change in their attitude, their beliefs and the film is poised to judge whether mankind’s survival instinct can prevail over darkness of a world they cannot imagine.