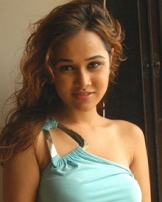 Priyanka Kothari, also known as Amoha and Nisha Kothari is an Indian Bollywood actress and model. She was born on November 30, 1983. Sagittarian Kothari was born in Kolkata, and grew up speaking English, Bengali, Rajasthani, and Hindi. She moved to New Delhi while in  the 10th standard and got her degree in Chemistry at Delhi University at Dayal Singh College. Her father is a businessman, her mother a home-maker, and she has a married elder sister.

After college, Kothari became a model and appeared in a few advertisements. She ventured into films with Jay Jay, a Tamil movie, as Amoha. She got her break through actor Madhavan, who recommended her for an audition after viewing her photographs. She made her Bollywood debut in the films and James and Sarkar (which came out first), both by Ram Gopal Varma.

She then went on to do The Killer with Emraan Hashmi and the Bhatts. She has gone on to do some insignificant films and roles; the movie audience is yet to see her in something that could be deemed career defining.

Kothari is known mainly for her daring costumes and sexy item songs that have been popular to an extent.