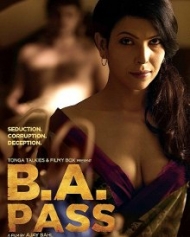 Drama
Release Date : 02 Aug 2013
Cast : Rajesh Sharma, Shilpa Shukla
Director : Ajay Bahl
Synopsis
B.A. Pass movie is based on one of the stories, THE RAILWAY AUNTY (by Mohan Sikka), from the book DELHI NOIR, an anthology (collections of short stories) based mainly in and around Delhi-NCR, which was published in 2010.

A young small town boy moves to Delhi to stay with his aunt and finish his college. Soon he is seduced by a mysterious married woman known to him as Sarika ‘Aunty’.

As the young boy gets more and more entrenched into his surroundings he discovers a city that thrives on corrupting even the most naive and innocent.