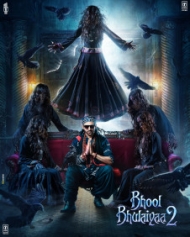 Bhool Bhulaiyaa 2 is produced by Bhushan Kumar, Murad Khetani, Anjum Khetani, and Krishan Kumar under the banner of T-Series and Cine 1 Studios. The movie released in theatres on May 20, 2022. As per the director Anees Bazmee Bhool Bhulaiyaa 2 is a not a psychological thriller but horror comedy.

Story In Detail
Bhool Bhulaiyaa 2 begins with an elaborate scene of a baba doing some mumbo-jumbo to lock a powerful spirit Manjulika in a room. Post the ritual where Anjulika (Tabu) is attacked by the ghost, the inhabitants of the haveli abandon the mansion and shift elsewhere.

Eighteen years later, Anjulika's niece Reet (Kiara Advani) runs into a stranger Ruhaan (Kartik Aaryan) when she is on her way back home to Rajasthan. Some casual flirting and a random dance number in the midst of the snow-clad land follows.

After the duo narrowly miss an unfortunate episode, Reet accidentally discovers a secret related to her cousin sister. The charming Ruhaan soon finds himself accompanying Reet to the haunted haveli where Manjulika's ghost was bottled up by her family. What follows next is a labyrinth of lies, deception, silly laughs and some chills.