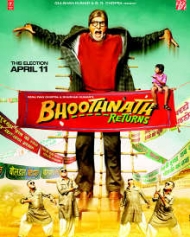 U | Fantasy
Release Date : 11 Apr 2014
Cast : Amitabh Bachchan, Boman Irani
Director : Nitesh Tiwari
Synopsis
Bhoothnath Returns movie is a sequel to 2008's Bhoothnath. Its a delightful concoction of humour and fantasy that will entertain in abundance.

The film is set in a chaotic urban locality and features a fearless, street-kid. Bhoothnath Returns is like a political satire in which a ghost takes on a corrupt politician by fighting elections against him. Boman Irani is cast as the antagonist who is challenged by Amitabh Bachchan.

Story in detail:
Bhoothnath Returns takes Bhoothnath's story forward. As he returns to 'Bhoot World' he is greeted with taunts and condemnation from other ghosts for bringing disrepute to the ghost-community for getting bullied by a kid on Earth. Post the humiliation, Bhoothnath decides to redeem himself and come back to scare a bunch of...