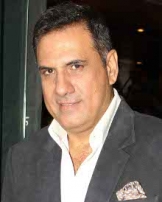 Boman Irani is an Indian film and theatre actor and photographer. Boman was born into a Parsi family on 1 October 1962. Sources dispute his date of birth as 2 October but Boman in an interview said he was born at 8:45 pm on the 1st of October.

He is a graduate of Mithibai College in Mumbai. After his graduation he pursued a career initially with the Life Insurance Corporation of India from 1982 to 1985. At the same time he also established an Uncle Chipps franchise in Dadar which ran until 1986 before shutting down owing to loss.

Boman moved into photography in 1987 and persisted with it until 1989. He is a professional photographer.

Boman's love of acting was always present even during school and college. He trained under acting coach Hansraj Siddhia from 1981 to 1983 and adopted professional acting methods. Unlike national theatre, Boman's expertise was more of British theatre and he soon developed fantastic accents.

Boman's mentor was Alyque Padamsee - the veteran theatre actor best known for his role as Mohammad Ali Jinnah in Gandhi. Boman's earliest theatrical appearance was in Roshni where he played a Cameo - at the Regional Theatre in Versova. He followed this up with serials like Family Ties and Mahatma vs Gandhi (Playing Gandhi after the role was turned down by Darshan Jariwala).

His busy film career has put a halt to his theatre career but despite this Boman continues to perform in theatre whenever possible. He has over 40 plays to his credit - around 15 of them as the lead character.

Boman started out in a number of advertisements like Fanta, Ceat and Krackjack biscuits (as Mr. Jack of the Krack and Jack duo). It was with Munnabhai M.B.B.S. that Boman became really popular. His role as J.Asthana was one of his most memorable. Since then Boman has risen to become one of the finest supporting actors in the film industry - most of his roles being: comedic (Main Hoon Na, Lage Raho Munna Bhai, Dostana, Waqt: The Race Against Time, No Entry and 3 Idiots), supporting (Veer-Zaara, Maine Gandhi Ko Nahin Mara, Lakshya, Honeymoon Travels Pvt. Ltd., Sorry Bhai!, Page 3 and My Wife's Murder), comedic-villainous (Khosla Ka Ghosla) and negative roles (Don - The Chase Begins Again and Eklavya: The Royal Guard).

Boman is a member of the Parsee Television Actors Community and is also its secretary. This elite community includes others, such as Smriti Zubin Irani and Cyrus Broacha. Boman also hosted the IIFA Awards together with actor Riteish Deshmukh in 2008 and 2009. He has also been on Kaun Banega Crorepati with Sanjay Dutt.

Irani is a Parsi and follows the religion of Zoroastrianism. He speaks a number of languages very fluently, which include English, Hindi, Gujarati and Bengali.