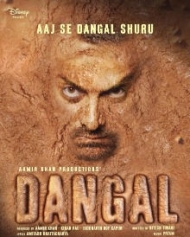 In Dangal, Aamir Khan will essay the role of an ex-wrestler Mahavir Phogat, the father of Indian women wrestlers Geeta and Babita Kumari Phogat.

The movie posters and trailer got a thumps up from both the critics and audiences. As of now the trailer has got a record views of 35+ million.

Gujjarwal, Narangwal, Kila Raipur, Dango and Leel in Punjab and Haryana are the main location of Dangal. Team Dangal took almost an year to complete the shoot.

The film's soundtrack was composed by Pritam Chakraborty, while lyrics were penned by Amitabh Bhattacharya.

As per the latest reports, movie is all set to hit the big screens on December 23.