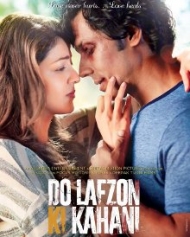 Do Lafzon Ki Kahani movie brooding love story with a little bit of action. Randeep Hooda Randeep Hooda will have an action packed role and he will be seen playing an ex-Mixed Martial Arts fighter and Kajal Aggarwal will also be seen in a prominent author backed role compared to her previous appearances in Bollywood.

This movie is based on the 2011 Korean movie Always which has already been adapted into 2015 Kannada movie Boxer.

As love blooms between the two, Sooraj decides to resume his life as a boxer which he had once left behind due to a past that lead him to jail sentence.

But dreaming of earning a new livelihood with Jenny, he decides to give life yet another chance. However, as fate would have it, Sooraj discovers that Jenny's lost eyesight is the consequence of the road accident that he witnesses when his victim commits suicide by jumping off a building and now Sooraj has only one aim in life, to give Jenny her eyesight back. He is ready to go to any lengths for it, even if it means losing a match and losing his life too.