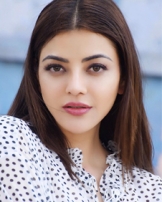 Kajal Aggarwal is an Indian actress, who has appeared in Telugu and Tamil films. She made her acting debut in the 2004 Hindi film Kyun...! Ho Gaya Na, playing a minor supporting role, before becoming a leading actress in the major South Indian film industries. She rose to fame after her performance as Yuvarani Mitravinda and Indu in the 2009 Telugu blockbuster film Magadheera.

She got her Tamil acting offer, which was veteran Tamil director Bhrathiraja's Bommalattam. The film, however, got delayed and released only in late 2008.

In 2008, she had her first Tamil-language film release, which was Perarasu's action entertainer Pazhani. The film, in which she shared screen space with Bharath, was a commercial success.

During 2009, she had four releases, three of which were in Telugu. Her only Tamil film that year, which was Saran's Modhi Vilayadu, released first; it garnered mixed reviews and poor box office returns. Next, she starred in the movie Magadheera, in which she essayed double roles for the first time. The film received universal critical acclaim as did the lead actors, including Kajal Agarwal, for their performances.

Agarwal, particularly, was praised for her portrayal of a princess, Yuvarani Mithravindha, in the film. The film was also commercially highly successful and broke several records, emerging as the highest-grossing Telugu film and as one of the biggest box office hits in India. Following Magadheera's phenomenal success, Agarwal became one of the most sought-after actresses in the Telugu film industry, catapulting her into the main foray of lead Telugu actresses.
Kajal also played the female lead in the high-profile Tamil projects Naan Mahaan Alla, Maattrraan, Thuppakki, Jilla, Vivegam and Mersal. She made a comeback to Hindi cinema with Singham, which was a hit, while another film Special 26 was also a box office success.
In 2020, a wax figure of Aggarwal was put on display at Madame Tussauds Singapore, making it the first of an actress from South Indian cinema.
Marriage
Kajal married with entrepreneur Gautam Kitchlu on 30 October 2020, the couple got married in a small, private ceremony in her hometown of Mumbai, India.