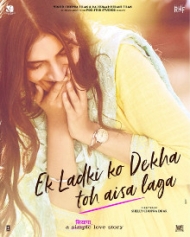 Ek Ladki Ko Dekha Toh Aisa Laga is a Bollywood comedy-drama, helmed by debut director Shelly Chopra Dhar. The movie stars Sonam Kapoor and Anil Kapoor in the lead roles. As per the director It's a story about love and relationship. The movie also stars Rajkummar Rao and Juhi Chawla and is slated to release on 1st February, 2019. Ek Ladki Ko Dekha Toh Aisa Laga begins with some naach-gaana at a wedding where we are introduced to Sweety Chaudhary (Sonam Kapoor), the daughter of the richest man in Mogha, Punjab. Her father Balwinder (Anil Kapoor) who is even called the 'Mukesh Ambani of Punjab', owns a garment factory though he always aspired to a chef.

he gender constraints are deeply set in the lives of the Chaudharys where Balwinder's mother Beeji believes that men only enter the kitchen to change gas cylinders while girls need to be married off once they reach a suitable age to start her life as a woman. While everyone is eager to keep Sweety hitched, the girl seems disinterested and harbours a secret which is known only to her brother. A year passes by and the scene shifts to Delhi. When Sweety takes refuge in a theatre hall to escape from her brother who has been spying on her, it's 'Ek Ladki Ko Dekha Toh Aisa Laga' moment for a playwright named Sahil Mirza (Rajkummar Rao) when he bumps into her. The two engage in a conversation about true love and Sweety tells him, "True love ke raaste mein, koi na koi siyaapa hota hi hota hai, Agar na ho, toh love story mein feel kaisi aayegi?"

Deeply affected by her words, Sahil lands up in Mogha with caterer-cum-aspiring actress Chatro (Juhi Chawla) to pursue his romantic interest, only to be caught unaware by Sweety's secret confession. The rest of the plot revolves around how everyone deals with their inner conflict to accept love in its true form.

The movie is produced by Vidhu Vinod Chopra under the banner Vinod Chopra Films Pvt.Ltd. and is distributed by Fox Star Studios and 20th Century Fox Pvt.Ltd.