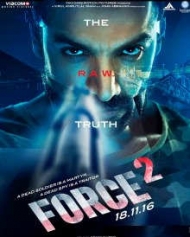 The 3:05 minutes trailer of  Force 2 is promising and packed with amazing action scenes, hinting that the movie will be an out-and-out action flick.