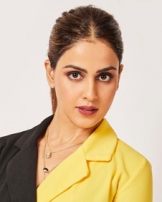 Genelia D'Souza is an Indian film actress and model. She has appeared in South Indian cinema and Bollywood films.

Genelia D'Souza was born in Mumbai. Genelia got her name from her parents Jeaneate and Neil and her pet name is Geenu. Genelia grew up in Mumbai and recognizes herself as a Mangalorean Catholic and her mother tongue is Konkani.

Genelia made her debut in Bollywood in 2003. Her first Hindi film was Tujhe Meri Kasam opposite Ritesh Deshmukh. She left Bollywood for a while to concentrate on the Tollywood industry.

She first hit the limelight with a Parker Pen commercial with Amitabh Bachchan and further did a Fair and Lovely ad with Krishnamachari Srikkanth. The ace Tamil director, Shankar was very much impressed with her performance in both the ads and cast her in a leading role in his Tamil version of "Boys" in 2003. The film was a box-office hit and launched her career in South India.

She acted in some successful Telugu films including Satyam, Happy, Samba and Sye. She followed it up with a pairing with actor Venkatesh in Subhash Chandra Bose.

She returned to the Tamil industry with Sachein with Vijay. It fared average at the box office. Her second Hindi movie was Masti and was also opposite Ritesh. This film was a moderate success. She played the role of Haasini in Bommarillu, which also starred Siddharth Narayan in the lead. This movie was a major commercial and critical success and she won the Filmfare Award as the Best Actress for her performance, besides other awards.

She was also a part of Mani Ratnam's stage show, Netru, Indru, Naalai. She came back to Kollywood with Santhosh Subramaniam, which is the remake of Bommarillu. The film also turned out to be rather successful as its predecessor. Her debut film in Kannada Satya In Love grossed 4 crores in its opening week, thus setting a new record in the Kannada film industry.

She once again appeared in Bollywood in Mere Baap Pehle Aap alongside Akshaye Khanna, which was moderately successful. Her final breakthrough in Bollywood was through the blockbuster, Jaane Tu Ya Jaane Na, where she is the heroine in the role of Aditi Mahant aka "Meow".

Her role has been widely admired for its sweetness and freshness, and new style of acting. The movie had debutant Imran Khan, Aamir Khan's nephew, as the hero. The movie released in July 4, 2008 and was a success across India and overseas.

D'Souza got married to Ritesh Deshmukh on 3 February 2012, according to Marathi marriage traditions in a Hindu wedding ceremony, they had a church wedding the next day. The couple's first child, a son named Riaan, was born on 25 November 2014. Their second son was born on 1 June 2016.