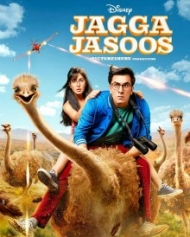 The movie is all about a teenage detective in search of his missing father.

The music for Jagga Jasoos is composed by Pritam. The lyrics were penned by Amitabh Bhattacharya &  Neelesh Misra. Overall, the movie has 29 songs. Ranbir will be seen singing most of his dialogues due to his struggle with stammering.

The first look poster of Jagga Jasoss was released on December 19, 2016. As per the reports, movie is all set to hit the big screens on July 14.