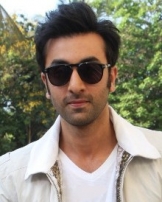 Ranbir Kapoor is an Indian actor who was born on 28 September 1982 in Mumbai, Maharashtra.

Ranbir Kapoor was born to actor Rishi Kapoor and actress Neetu Singh. He has a sister, Riddhima Kapoor Sahni. He did his schooling from Bombay Scottish School in Mahim, Mumbai and then he went to New York for getting training in acting at The Lee Strasberg Theatre and Film Institute.

Ranbir Kapoor dated ollywood actress Deepika Padukone. He broke up with her in the year 2009.

In the year 2009, he starred in the film Wake Up Sid. It was successful at the box office. This film gave him the nomination for Best Actor in various award ceremonines. Then he was seen in the film Ajab Prem Ki Ghazab Kahani, which was one of the biggest hits of the year. He also did a film Rocket Singh: Salesman of the Year which was a flop at the box office.

Then in the year 2010 he was seen in the film Rajneeti which was declared a blockbuster movie. He then appeared in Anjaana Anjaani with Priyanka Chopra.

Ranbir Kapoor married actress Alia Bhatt in 2022. The couple tied knots in a private ceremony in the presence of their close friends and immediate family members.