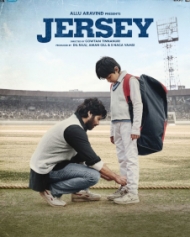 Drama
Release Date : 22 Apr 2022
Cast : Shahid Kapoor, Mrunal Thakur
Director : Gowtam Tinnanuri
Synopsis
Jersey is a Bollywood remake of Telugu movie of the same name. The Hindi version star Shahid Kapoor in the lead role. The movie will be directed by Gowtam Tinnanuri, who also helmed the original Telugu version, starring Nani. Jersey revolves a talented yet failed cricketer who decides to revive his career to fulfill his son's wish for a jersey as a gift. Shahid Kapoor has undergone intense and rigourous training to get into the skin of a cricketer for Jersey.

After Arjun's son Ketan (Prit Kamani) hands over a copy of 'Jersey', a book based on...