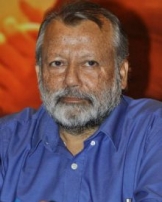 Pankaj Kapoor is an Indian theatre, television and film actor from Ludhiana, Punjab, India. He has appeared in several television serials and films. His most acclaimed film roles till date have been that of Dr. Dipankar Roy in Ek Doctor Ki Maut (1991) and 'Abba ji' in Vishal Bhardwaj's Maqbool (2003), both of which got him National Film Awards.

In the 1980s and 1990s he became a household name through his TV series Karamchand, a surprisingly popular, comedy television series in the detective genre and then, Office Office, a comic satire on the prevalent corruption.

After graduating from National School of Drama, he was engaged in theatre for the next four years, till he was offered Gandhi by Richard Attenborough.

He made his film debut with Shyam Benegal's film Arohan (1982). Following that he played the role of Mahatma Gandhi's second secretary Pyarelal, in the Richard Attenbrough film Gandhi in 1982. Later, he also dubbed for Ben Kingsley in the Hindi version of the film.

This was the time when parallel cinema in India was in its full bloom, and he made himself a favourite of most of them. Over the next decade, he appeared in many art films, many of which went on to win National Film Awards as well.

In 1986, he switched to television, with his memorable role of 'Karamchand Jasoos' in the detective-comedy, Karamchand, also starring Shushmita Mukherjee. The serial got him instant nation-wide popularity.

Over the years, he has been seen in numerous TV serials, including, 'Kab Tak Pukaroon' (Doordarshan) 'Zabaan Sambhaal' Ke, a remake of English TV series, Mind Your Language; 'Lifeline' with Vijaya Mehta, 'Neem ka Ped' which displayed his finest acting prowess on television, and finally comic interludes in 'Philips Top 10' which made him once again, a favourite of the masses.

Meanwhile, his tryst with art cinema continued, as he starred in classics like Chameli Ki Shaadi (1986), Ek Ruka Hua Faisla (1986), and Yeh Woh Manzil To Nahin (1987). In 1987, his comic side was visible again in the commercial action film Jalwa, also starring Naseeruddin Shah.

His first National Film Award came with the 1989-film, Raakh, which also starred Aamir Khan, in a breakthrough performance. He also starred in the classic Punjabi film Marhi Da Diva (1989).

He also featured in the 1992 critically acclaimed Mani Ratnam film Roja directed by Mani Ratnam. The movie was made in Tamil and later dubbed in Hindi, Marathi, Telugu and Malayalam.

His strongest performance in the early part of his career came from his lead role of a struggling scientist in the film Ek Doctor Ki Maut (1991), for which he was awarded the 1991 National Film Award - Special Jury Award.

In 2000, he returned to television with the serial "Office Office". In 2003 he delivered a stunning performance in the critically acclaimed Maqbool, Vishal Bhardwaj's adaptation of Shakespeare's Macbeth. Maqbool also got him the 2004 National Film Award for Best Supporting Actor. Meanwhile, his run for excellence in acting continued with films like Blue Umbrella (2005), Dus (2005) and Halla Bol (2007).

Bollywood actor Shahid Kapoor is Pankaj's son by his first wife Neelima Azeem. In 1984, Pankaj married Supriya Pathak, and they have a son and a daughter.