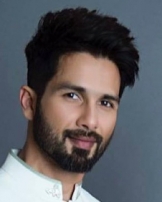 Shahid Kapoor is an Indian actor born on 25 February 1981 in Delhi, India. Shahid was born to indian actors Pankaj Kapoor and Neelima Azeem. His parents got divorced when he was three. After their divorce he lived with his mother in Delhi, but has a good relationship with his father and his stepmother. He studied in Rajhans Vidyala in Mumbai.

He dated Kareena Kapoor for three years and then they seperated.

He first appeared in some music videos and ads. He appeared in a Pepsi commercial with Shahrukh Khan, Kajol and Rani Mukerji. Then he was seen in a music video Aankhon Me Tere Hi Chehra. He then decided to join Shiamak Davar Institute for the Performing Arts. He was then seen in the film Taal as a background dancer in the song Kahin Aag Lage Lag Jawe and in film Dil to Pagal Hai with Karisma Kapoor.

Later in year 2005, he acted in some three films which were successful. He acted in a film Sikhar which gave him a Star Screen Award for Best Actor nomination.

In the year 2006, he starred in two films, 36 China Town and Chup Chup Ke which were average  at the box office. Then he starred in a romantic drama Vivah which was his second biggest commercial success till now. For this film again he was nominated for the Best Actor Award at the Star Screen Awards.

In the year 2009, he acted in Kaminey where he played a double role. It was successful at the box office. Then later on that year he starred in the film Dil Bole Hadippa!

Then in the year 2010 Shahid appeared in the films Chance Pe Dance and Paathshala. Then he appeared in Yash Raj Films, Badmaash Company which did average business at the box office. In April 2010 he made another film Milenge Milenge.

In 2015, he married to Mira Rajput, with whom he has a daughter.