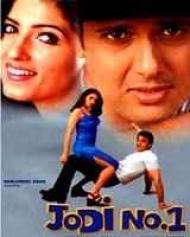 Comedy
Release Date : 13 Apr 2001
Cast : Sanjay Dutt, Govinda
Director : David Dhawan
Synopsis
Jodi No.1 is about two friends Jai (Sanjay Dutt) and Veeru (Govinda) who are good friends and also partners in crime, thus their friendship is named Jodi No. 1. They first gain the confidence of people and later con them.

But soon have to run from Bombay after an encounter with a local Bhai. While on the run, Jai and Veeru meet Inder (Rajat Bedi), an NRI, who is on his way to work as a manager, in Goa, for Rai Bahadur (Anupam Kher), a wealthy businessman who owns a beer factory