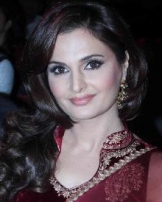 Monica Bedi is an Indian actress.

Early life
Bedi was born to Dr.Prem Kumar Bedi and Shakuntala on 18th january 1975, her parents migrated to Norway when she was 10 months old. They run a garment store in Norway.

Career
Bedi started her career with Suraksha in 1995.

Jail sentence
In September 2002, she was arrested along with Abu Salem by the Lisbon police for entering Portugal with forged documents. After years of legal battle, they were deported to India in November 11, 2005, after India promised Portugal that Salem would not receive death sentence.

On 29 September 2006, an Indian Court convicted Monica Bedi for passport forgery. CBI had filed a case against Bedi under section 420 (cheating), 120 B (criminal conspiracy) and section 12 of the Passport Act for procuring a passport on a fictitious name.

Bedi was acquitted of all criminal charges by a Bhopal court on July 16 2007 due to lack of evidence against her. Yet another case for possessing a passport from Hyderabad on forged documents in the name of Sana Malik is pending in a Hyderabad court. The Hyderabad Court however denied her bail in the case as she failed to produce her original passport. Monica said she lost her passport in Dubai. On July 25 2007 she was released from the Chanchalguda Central Jail and was received by her father Prem Kumar Bedi. She said that she planned to make a comeback to films and claimed to be getting offers from both Bollywood and the Telugu film industry.