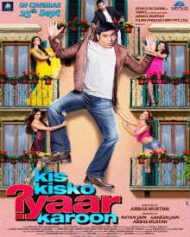 Story in detail:
This is the story of a man who goes by 3 identitites- Shiv a.k.a Ram a.k.a Kishan (Kapil Sharma). This is due to his simultaneous marriages with 3 women. His wives are played by Simran Kaur Mundi, Manjari Phadnis and Sai Lokur .

As luck would have it, all his wives live in the same apartment. But none of them knows the fact that Shiv,Ram and Kishan are one and the same man and cheating on them.

Despite having 3 wives he falls for another woman Elli Avram. He plans to marry Elli Avram as well. But before he can execute another marriage,some sort of disturbance is caused. All his three wives come to know of his cheating. The movie then switches to a very interesting mode to know which you must watch the movie.