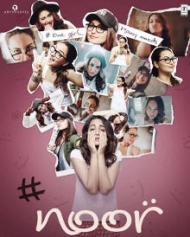 Noor is based on Saba Imtiaz's 2014 crime novel Karachi, You're Killing Me!. In the movie Sonakshi potrays the role of a carefree journalist Noor, whose life takes a dramatic turn when she's met with certain incidents.

The music for Noor is composed by Amaal Mallik. The lyrics were penned by  Manoj Muntashir and Kumaar. Overall, the movie has seven songs.

The movie is all set to hit the big screens on April 21.