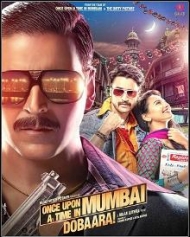 Once Upon A Time In Mumbaai Dobara

The film, earlier known as Once Upon A Time In Mumbaai Again was renamed to its present name.

The movie commences from where the previous film ended with Shoaib Khan (Akshay Kumar) being the reigning don after successfully assassinating his mentor as well as his predecessor, Sultan Mirza (Ajay Devgn) thus earning the respect and reverence of the people.

He is the charismatic and suave man with womanising skills who has extended his empire upto the Middle east on the west. His sole companions and friends are Javed, who oversees his illegal and shady works for him, his old-time love Mumtaz (Sonali...