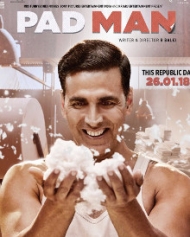 Pad Man is based on Twinkle Khanna's book, The Legend Of Lakshmi Prasad, which is inspired from the life of activist Arunachalam Muruganantham. He reshaped the notion of menstrual hygiene in rural India by creating a low-cost sanitary napkin apparatus.

The music for Pad Man is composed by Amit Trivedi. The lyrics were penned by Kausar Munir. Overall, the movie has five songs and all the songs become instant hits upon release.