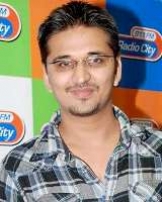 Amit Trivedi is an Indian film composer based in Mumbai. This singer, lyricist and musician shot to fame in the Hindi film music scene for his critically acclaimed work in Aamir (2008) and the more popular Dev D (2009).

In his younger days, a electronic musical instrument fascinated Amit and he was slowly drawn towards music, mainly influenced by western music. At the age of 19-20, he started composing music. During his college days he became part of a band called Om, which was primarily a group of music lovers, and the band would perform at local gigs, small shows and live performances. They struck gold when Times Music took notice of them, at one of the shows, and offered to launch their album. The album, however, did not fare well, due to lack of proper promotions.

He also composed for non-film albums. As a part of a two year contract with Sony BMG, Amit composed some tracks for Abhijeet Sawant’s Junoon and one track in Prashant Tamang's debut album.

Film music eventually came his way, when friend and playback singer Shilpa Rao suggested Amit's name to film director, Anurag Kashyap. Anurag was in search of a new composer with a distinct vision for his film. After meeting up with Amit, the director offered him the chance to compose for Dev D. Dev D was intended to be Amit's debut but the film ran into production delays and was shelved for some time.

Anurag Kashyap, who was the creative producer for his assistant, Raj Kumar Gupta's directorial venture Aamir recommended Amit for the movie. Amit was roped in and started working on the film soundtrack. Raj Kumar and Amit worked on making the soundtrack fuse with the film narrative. The unconventional soundtrack received critical recognition.

By the end of 2008, Dev D was finally seeing the light of the day. The soundtrack, released in December, consisted of 18 tracks of multiple genres. Amit coined the soundtrack as "baap of different genres".