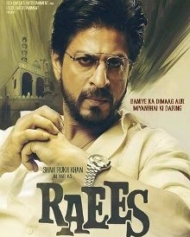 As per the filmmakers, Raees story is a pure work of fiction, it's not based on any person, living or dead. The movie is set against the backdrop of 1980's Gujarat, which tells the story of a bootlegger whose business is thwarted by a tough policeman(Nawazuddin Siddiqui).

In Raees, SRK plays the role of a bootlegger named 'Raees', who has established himself as Gujarat's most ruthless crime lord at the peak of 1980′s. Pakistani actress and former VJ, Mahira Khan plays the love interest of SRK in Raees.

The music and background score for the film is...