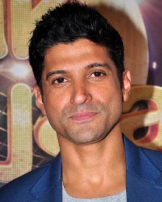 Farhan Akhtar is the son of renowned Indian lyricist/poet Javed Akhtar and screenplay and story writer Honey Irani. He is the brother of Zoya Akhtar, cousin of Kabir Akhtar, and grandson of Jan Nissar Akhtar.

In an interview on the talk show "The Lounge" with Simone Singh (on the Indian channel CNBC-TV18), Farhan Akhtar said that when he left college, he spent about two years at home and did nothing productive. During those two years, he watched about two films daily.
Akhtar said that it was this period of his life which allowed him to connect with Karan Shergill, the protagonist of Lakshya (2004). Lakshya, which film Akhtar directed, begins with Karan as a young, unemployed slacker who stays at home, sleeps late, and has no ambition or aim in life.

Farhan loves to write poetries in English and Urdu.