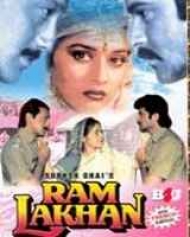 Action Drama
Release Date : 27 Jan 1989
Cast : Anil Kapoor, Jackie Shroff
Director : Subhash Ghai
Synopsis
Ram Lakhan is a story of two brothers who are brought up by their mother (Rakhee Gulzar)after their father is murdered by his treacherous cousins who also steal his inheritance.

The elder brother Ram (Jackie Shroff) is an honest person who fights crime and corruption as a police inspector. His brother Lakhan(Anil Kapoor) is for making money in any way possible. Lakhan sides with his richer relatives who include his uncle (Amrish Puri). All of them are involved in illegal activities. Lakhan's secret soon comes to light and the brothers are estranged.