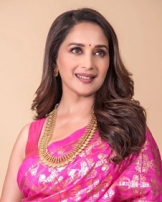 Madhuri Dixit Nene is an Indian actress who is known for her work in Hindi cinema. She has been praised by critics for her acting and dancing skills.

Madhuri Dixit is a native of Mumbai, India. She was born Madhuri Shankar Dixit to Shankar and Snehlata Dixit, of a Marathi Chitpavan Brahmin family. Dixit attended Parle College and wanted to be a micro-biologist. She is trained as a Kathak dancer, in the Indian classical tradition.
Madhuri Dixit made her acting debut in Abodh (1984). After a few minor and supporting roles, she landed the lead female role in Tezaab (1988), which shot her to stardom, and for which she received her first Filmfare nomination. She then starred in a number of hits that included Ram Lakhan (1989), Parinda (1989), Tridev (1989), and Kishen Kanhaiya (1990).

In 1990, Dixit starred in Indra Kumar's romantic-drama Dil, alongside Aamir Khan. She played the role of Madhu Mehra, a rich and spoiled young girl who falls in love with Raja, played by Khan, and later leaves her house in order to marry him. The film became one of the biggest box-office hits of the year in India, and Dixit's performance earned her the first Filmfare Best Actress Award of her career.

She followed Dil with another line of hits, including Saajan (1991), Beta (1992), Khalnayak (1993), Hum Aapke Hain Kaun! (1994), and Raja (1995). Dixit's performance in Beta, that of a woman married to an illiterate, well-meaning man who exposes her scheming mother-in-law, won her a second Filmfare Award for Best Actress.

Hum Aapke Hain Kaun! became one of the biggest grossers ever in the history of Hindi cinema. It went on to collect over Rs. 650 million in India and over Rs. 150 million overseas, and won Dixit her third Filmfare Best Actress Award. In that same year, Dixit was also nominated in the same category for her performance in Anjaam, which won her critical acclaim.

After an unsuccessful year in 1996, Dixit appeared as Pooja in Yash Chopra's Dil To Pagal Hai (1997). The film was a major national success, both critically and commercially, and Dixit won her fourth Filmfare Best Actress Award.In that same year, Dixit starred in Prakash Jha's critically acclaimed Mrityudand. The film was known for straddling the boundary between a commercial and an art film. It won the Best Feature Film award at the Cinéma Tout Ecran in Geneva and the Bangkok Film Festival. Dixit's performance in the film landed her the Best Actress award at the annual Star Screen Awards.

Dixit is not only known for her acting skills, but for her dancing skills as well. Her dance sequences, accompanying famous Bollywood songs such as Ek Do Teen (from Tezaab), Bada Dukh Deenha (from Ram Lakhan), Dhak Dhak (from Beta), Chane Ke Khet Mein (from Anjaam), Choli Ke Peechhe (from Khalnayak), Akhiyan Milaun (from Raja), Piya Ghar Aya (from Yaarana), Key Sera (from Pukar), Maar Daala (from Devdas), among others, have received abundant critical acclaim.

In 2002, she starred in Sanjay Leela Bhansali's Devdas with Shahrukh Khan and Aishwarya Rai. Her performance was applauded and earned her a Filmfare Best Supporting Actress Award. The film attracted worldwide attention and was featured at the Cannes Film Festival.

The following year a film named after her, Main Madhuri Dixit Banna Chahti Hoon!, was released[6] in which a woman (played by Antara Mali) aspires to become the new Madhuri Dixit by trying her luck in the Bollywood industry.

On February 25, 2006 she performed on stage for the first time in six years at the Filmfare Awards to music from her last movie Devdas. Her performance was choreographed by Saroj Khan.

Madhuri Dixit has been the muse for the famous Indian painter M.F. Husain who considers her the epitome of womanhood. Hence he made a film named Gaja Gamini (2000) in which Madhuri acted. The film was intended as a tribute to Ms. Dixit herself. In this film she can be seen portraying various forms and manifestations of womanhood including the muse of Kalidasa, Leonardo's Mona Lisa, a rebel, and an incarnation of musical euphoria etc.

On December 7, 2006, Dixit returned to Mumbai along with her husband and sons to start filming for Aaja Nachle (2007). The film released in November 2007 and despite the critics panning it, Dixit's performance was well received, with the New York Times commenting about her that "she's still got it".

On Women's International Day in 2007, Dixit topped Rediff's list of the Best Bollywood Actresses Ever.
In 1999, she married Sriram Madhav Nene, an Indian doctor who resides in USA. A UCLA-trained cardiovascular surgeon who practices in Denver, Nene is also from a Marathi Konkanastha Brahmin family. She has two sons, Arin (born in March 2003 in Colorado) and Ryan (born on March 8, 2005 in Colorado).

She has two elder sisters, Rupa and Bharati, and an elder brother, Ajit. Madhuri and her family resides in Denver, Colorado, USA.