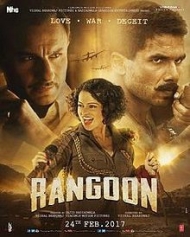 Rangoon is set against the backdrop of Second World War, where a lot of bloodshed happened when the British army fought against Subhash Chandra Bose’s Indian National Army in Burma (Myanmar), which was called 'Rangoon' in those times.

The music for Rangoon is composed by Vishal Bhardwaj, while the lyrics were penned by Gulzar. Overall, the movie has 12 songs with 48:06 min total length.

As per the latest reports, movie is all set to hit the big screens on February 24. The movie is produced by Sajid Nadiadwala & Vishal Bhardwaj, under...