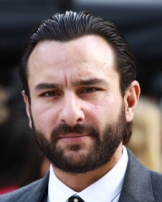 Saif was born into a Nawab family. His father's name is Mansoor Ali Khan Pataudi who is the eighth Nawab of Pataudi and a former captain of the Indian Cricket Team. His mother is Sharmila Tagore who is an actress and also has been the head of the Indian film censorship board.
He has two sisters, Saba Ali Khan and Soha Ali Khan. Saif initially studied at Lawrence School Sanawar and then he went to Lockers Park School in Hertfordshire. Then he moved to Winchester College in UK.

Saif was married to Amrita Singh. They divorced in the year 2004 after thirteen years of married life. They have two children. He is currently married to Kareena Kapoor.

In the year 2001 he acted in another film Dil Chahta Hai which was another hit of the year. In the year 2003 he starred in the film Kal Ho Na Ho with Shahrukh Khan and Preity Zinta. It became the second top-grossing film of the year. He won the Filmfare Best Supporting Actor Award, as well as other awards in that category.

Then in the year 2004 he again starred in Hum Tum in a lead role. He won the Best Comedian award at the Filmfare Awards. Then in the year 2005 he acted in a film Salaam Namaste which became the top grossing film in the overseas market. It was the first Indian film which was entirely shot in Australia. In the year 2004 he played a negative role in the film Ek Hasina Thi and in Parineeta.

Then in the year 2006 he starred in an art film Being Cyrus. Then he acted in another film Omkara for which he recived a positive response from critics.

In the year 2007 he acted in a film Eklavuya: The Royal Gaurd which made an official entry to the Oscars. His next film was Ta Ra Rum Pum which was a success.

In the year 2009, Saif became a producer. He then set up his own producion company Illuminati films, producing his own film, Love Aaj Kal. It was a huge success. Then he starred in a film Kurbaan. He got a Padma Shri award which is the fourth highest civilian award given by the Government of India.