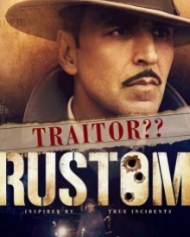 Rustom movie is a romantic crime thriller, directed by Tinu Desai. The movie is inspired from the famous KM Nanavati murder case.

Rustom stars an ensemble cast which includes Akshay Kumar, Ileana D'Cruz, Arjan Bajwa and Esha Gupta. It is for the first time that Akshay Kumar is playing a Naval Officer, in his career.

The plot of the film is roughly based on the real scandalous incident which took place in 1959 in Mumbai. It's a story of an honest commander Rustom Pavri (Akshay Kumar) from Indian Navy for whom his nation comes first!

Later, the story pans to his beautiful world in which he is happily married to his wife Cynthia Pavri (Ileana D'Cruz) and everything goes well between the duo until he gets to know about the...