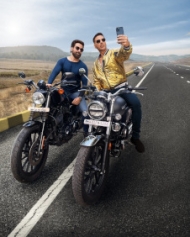 Selfiee is a Bollywood action comedy-drama helmed by Raj Mehta. This was an official remake of the Malayalam superhit movie Driving License, which was written by Sachy. The movie stars Akshay Kumar and Emraan Hashmi in the lead roles, along with Nushrat Bharucha, Diana Penty, and many others in supporting roles.

The story of Selfiee is told through the events that occur in the city, where a well-known movie star who wants to refresh his license runs into a supporter of the motor vehicle officer. Few confusion often leads to numerous disputes and problems between the leads.

In a scene from the movie Selfiee, Akshay Kumar can be seen dancing and taking a selfie alongside Emraan Hashmi, who is dressed as an officer in red and white. which prompts an immediate reaction to the hype of this movie from the audience.