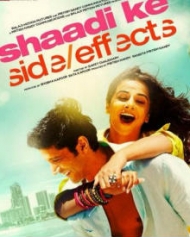 The iconic characters, Sid and Trisha, come to life in the sequel, now as husband and wife. Sid having beaten his fear of marriage and Trisha having finally gotten around to saying her vows the third time round.

Now they must address themselves to the impossible task of coping with each other's fantasies and realities. Will they succeed? Only Shaadi Ke Side/Effects will tell.