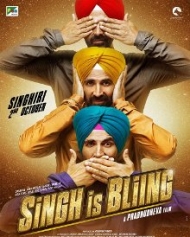 In Singh Is Bling (Singh Is Bliing), will once again see Akshay playing a Sardar in the film. This is the second venture of the superhit jodi of ‘Rowdy Rathore’, Akshay Kumar and Prabhudheva.

Story in detail:
Raftaar Singh (Akshay Kumar), the apple of his mother's (Rati Agnihotri) eye, is also the biggest irritant for his father (Yograj Singh). He is always looking to have fun and runs away from responsibility. This displeases his father to no end. One day, fed up of his dalliances, his father orders Raftaar to go to Goa and work for his friend there, and learn to take on responsibility.

Respecting his father's wishes, Raftaar leaves. Once in Goa, he impresses his new boss with his enthusiasm and out of the box thinking. Soon he gets an important assignment from his boss which gets him to meet Sara (Amy Jackson) and thus begins their unique love story.

Raftaar is joined in this unique romance by the loveable Emily (Lara Dutta) who almost ruins their budding love. What ensues is a great comedy of errors, as one hilarious situation after another unfolds. Raftaar slowly begins to fall head over heels for this exotic, mysterious girl.

What starts as a harmless romance takes a deadly turn when he realizes that Sara is not who he thinks she is and is here with an agenda which takes him to Romania. The question is, will a village simpleton, who can't even communicate properly be able to win her over in a distant and dangerous land.