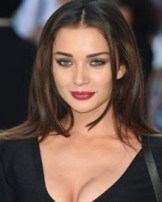 Amy Louise Jackson is a British model, actress and Miss Teen World 2008. Jackson is from Knowsley, Liverpool, United Kingdom. Amy revealed that she was dating hotelier George Panayiotou, the son of British-Cypriot businessman Andreas Panayiotou. She announced that she is pregnant with her first child. On 6 May 2019, Jackson and Panayiotou became engaged. On 23rd September the actress gave birth to baby boy named Andreas.

"I was completely shocked to win and so happy. I really thought I had not made the final five. But then I went on to take the title. I made lots of friends during the competition and may now be going to live in Texas for a year to promote the contest."

Jackson won 18 various prizes, which include: a modeling contract in the US, a wardrobe of clothes, cosmetics, shoes and a £10,000 scholarship. Since the competition in August 2008, Jackson has returned home to England and signed a second modeling contract with British agency Boss Model Management.

Career
Jackson's career began in the UK through modeling agency Boss Model Management. The commercial model has now made her mark in India not only modeling but also in the South-Indian Chennai based Kollywood film industry. She appeared in an Indian Tamil movie Madharasapattinam, opposite Arya and Matthieu Bellon, which was released in April 2010.