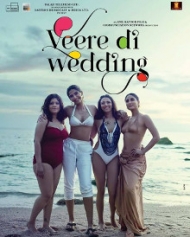 Veere Di Wedding is a 2018 Bollywood women-centric comedy movie, which has been directed by Shashanka Ghosh. The movie stars  Kareena Kapoor, Sonam Kapoor, Swara Bhaskar and Shikha Talsania in the lead roles.

Veere Di Wedding begins with four teen girls popping the bubbly and indulging in some locker room talks post wrapping up their final exams. A decade later, we get a sneak-peek into their adulthood. Kalindi (Kareena Kapoor Khan) is a commitment-phobe; blame it on a broken home, Avni (Sonam Kapoor) is a divorce lawyer whose mother keeps nagging her to get married. Sakshi (Swara Bhaskar), a stinky rich girl whose marriage is in shambles and Meera (Shikha Talsania) whose 'Bade Papa' severs ties with her after she gets married to a firang.

Things take a drastic turn when Kalindi's boyfriend Rishabh (Sumeet Vyas) goes down on his knees and proposes marriage to her. Kalindi initially hesitates but later gives in and agrees to get hitched. From Bondi in Australia, she finds herself disappearing beneath piles of Banarasi sarees and West Delhi 'Malhotra' jewellery and struggling to get into her 'fairy-princess' gown for her roka. Thankfully, she has besties aka 'Veeres' by her side. However, their happiness is shortlived when a 'siyappa' causes Kalindi to call off her marriage.

Soon, the four 'Veeres' zoom off to Phuket to relive their fond memories and rethink before taking the most important decision in their lives.