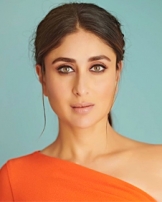 Kareena Kapoor is an Indian Actress and Producer, who mainly works in Hindi Film Industry. She is a notable actress for playing prominent roles in a range of films like romantic, crime, and action dramas. As a leading actress in Bollywood Industry, she has received several awards and recognition for her incredible contribution to the film industry.
Personal Life
Kareena Kapoor was born in Mumbai on September 21, 1989, to veteran actor Randhir Kapoor and actress Babita. The actress belongs to the fifth generation of Kapoor's legacy in the Bollywood film industry. She has a sister, Karishma Kapoor, who is also a well-known actress in Bollywood.
Kareen Kapoor completed her studies at Jamnabhai Narsee School in Juhu and Welham Girls Boarding School in Uttarakhand. Then, she was admitted to Mithibhai College for two years graduation course. Thereafter,  she went to the US and completed a three-month summer course in microcomputers at Harvard Summer School. After completing the course in the US the actress came to India and joined Government Law College Mumbai.
After one year, the actress found her interest in acting and she quit academic learning and, joined an acting school. The actress made her first debut in the Bollywood industry in the film 'Refugee'along with actor Abhishek Bachchan. Directed by J.P.Dutta in 2000.
Kareen Kapoor tied the knot with the Bollywood Superstar Saif Ali Khan in 2012. The actress gave birth to their two sons-Taimur Ali Khan and Jehangir Ali Khan.
Career Life
She made her initial acting debut in 2000, along with actor Abhishek Bachchan in the film refugee. The film was not successful, even though the actress won critical acclaim and  Filmfare Award for Best Female Debut in the same year. From there she appeared in the films like Mujhe Kucch Kehna Hai, Yaddein, and Ajnabee. Later, the actress shared her first screen space with Bollywood King Khan in the film 'Ashoka'which in 2001, directed by Santhosh Shivan. In the same year, she acted in the super hit movie Kabhi Kushi Kabhie Gham'.The movie become successful, and her character 'Pooja' got much popularity among the audience.
The actress appeared in the romantic comedy film 'Jab We Met'in 2007, which break down the box office collection. The film remains one of the most popular romantic films in Bollywood. Later the film was remade in Tamil as Kanden Kadhalai. Later, she appeared in a series of romantic comedy movies like Golmaal Returns, 3 Idiots, Milenga, Milenga, Golmaal-3, BodyGuard, and  Ra-One.
In 2014, the actress appeared in a tiny role in Ajay Devgan's action film Singham Returns and Salman Khan's Bajarangi Bhaijaan(2015).In 2016, she featured in the movies Ki&Ka and Udtaa  Punjab.
After taking two years off, the actress came back to the sets after giving birth to her first baby boy. The actress returned to acting with "Veere Di Wedding" in 2018. Since then, she has acted in films like Angrezi  Medium(2020), Good Newz(2019), and Laal Singh Chaddha(2022).