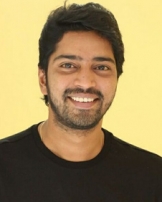 Allari Naresh is an Indian film actor who stars in Tollywood films. He is the son of Telugu veteran director and producer EVV Satyanarayana. He got the tag Allari before his name after the success of his first film. But his debut film in Tamil, Kurumbu, which was a remake of Allari is considered a flop.

This tall and skinny actor of Tollywood is capable of tickling your funny bones. His career started with Allari, a comedy film, which did average business at the box office. Though Naresh was well appreciated, his slim body was initially a let down.

Later, with the movie Kithakitalu, a solid hit directed by his father EVV, he proved that his sleeky body is apt for such comedy roles and that turned out to be the right break he needed.In 2008, he was given the "Star of the Year" award. He had 8 movies released in 2008 and 5 of them were hits, while 2 were average and 1 was a flop.

Maa Alludu Very Good was another movie which rocked all over. He is considered to create a bench-mark for comedy roles. He generally imitates the characters of other big heroes' films in a satirical manner, which has always received great accolades.

He received Nandi Award, as a Best Supporting Actor 2009, for his Performance in Gamyam. He has consistently made his presence felt on screen. The way he delivers his comedy is simply awesome to watch.