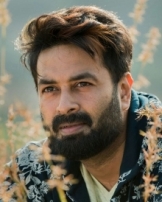 Bhasi Bhaskar is an Indian actor, known primarily for his work in Kannada cinema, in addition to appearances in a handful of Hindi films.

Bhaskar was born in Mysore and brought up in Bangalore. His father was as a scientist at DRDO under DR APJ Kalam. His father played as a cricketer for the then Mysore state and was intrigued by his father’s passion for the game of cricket. He followed his father’s legacy as a dynamic person, as he too turned out to be a multidimensional person. He was fascinated by the personality and achievements of DR. Rajkumar and Sunil Gavaskar, whom he considered to be his idol and tried to follow in their footsteps later on in his future endeavours.

Although he, later on, proved his talent as a fine actor in the Sandalwood and Bollywood industry, his achievements as a cricketer are also worth noting when he played as a cricketer while pursuing his studies in Kamala Nehru School and Bangalore high school. He played minor county cricket and was in the Ranji squad of Karnataka, managing both his studies and his passion for cricket. He represented Bangalore University as a cricketer in many occasions as he was supported by his college administration. Disproving the common Indian notion that sports and academics cannot be properly balanced, Mr Bhaskar turned out to be an exception, as he later secured a job in a bank due to his contributions to the cricketing circle. He maintained his passion for cricket while working, as he played for the state senior under 25. His knock as a batsman for his state - Karnataka, against Hyderabad in Hyderabad where he scored 177, despite the heavy turnout and support for the local team. The story keeps going and going - Under 25 matches, State Jr. Cricket Team etc. Mr BV Bhaskar has stood through the bowling onslaught of the most renowned national level cricket tournaments. He continues to be an inspiration for the current generation as he maintained a perfect balance between academics and sports, and later on with career and sports.

His dynamic personality took a larger effect when he accepted a role as a theatre actor when in 2006 he accepted an offer to play in “Mane Mane Kathe” at the iconic “Ravindra Theater”. He upgraded his command over Urdu, Hindi and English to perform as a linguistically holistic actor and featured in around 20 plays.

Bhaskar soon got a break in mainstream cinema and debuted in Sandalwood in 2008 with the movie 'Veeraparampare'. This was never enough for the man, BV Bhaskar. He went on to act in 2 Bollywood movies - MS Dhoni and Naam Shabana; and 6 Sandalwood Movies - Veeraparampre, Warewaha, Munjanne, Ondu Ksnadalie, Annepatakie and Kempiruve.

He continued to balance his life as a cricketer as well and was a part of the ‘Celebrity Premier League’. His remarkable 20 runs off last over against Chennai will remain as the part of the audiences, forever.